Mean, median and mode in Excel

When analyzing numerical data, you may often be looking for some way to get the "typical" value. For this purpose, you can use the so-called measures of central tendency that represent a single value identifying the central position within a data set or, more technically, the middle or center in a statistical distribution. Sometimes, they are also classified as summary statistics.

How to calculate mean in Excel

Arithmetic mean, also referred to as average, is probably the measure you are most familiar with. The mean is calculated by adding up a group of numbers and then dividing the sum by the count of those numbers.

In Microsoft Excel, the mean can be calculated by using one of the following functions:

For the in-depth tutorials, please follow the above links. To get a conceptual idea of how these functions work, consider the following example.

In a sales report (please see the screenshot below), supposing you want to get the average of values in cells C2:C8. For this, use this simple formula:

To get the average of only "Banana" sales, use an AVERAGEIF formula:

To calculate the mean based on 2 conditions, say, the average of "Banana" sales with the status "Delivered", use AVERAGEIFS:

You can also enter your conditions in separate cells, and reference those cells in your formulas, like this: 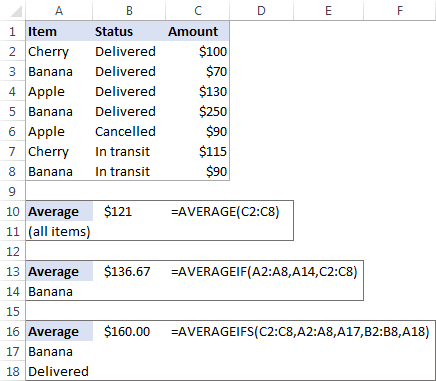 How to find median in Excel

In Microsoft Excel, a median is calculated by using the MEDIAN function. For example, to get the median of all amounts in our sales report, use this formula:

To make the example more illustrative, I've sorted the numbers in column C in ascending order (though it is not actually required for the Excel Median formula to work): 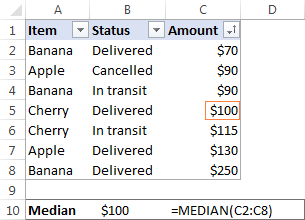 In contrast to average, Microsoft Excel does not provide any special function to calculate median with one or more conditions. However, you can "emulate" the functionality of MEDIANIF and MEDIANIFS by using a combination of two or more functions like shown in these examples:

How to calculate mode in Excel

Mode is the most frequently occurring value in the dataset. While the mean and median require some calculations, a mode value can be found simply by counting the number of times each value occurs.

For example, the mode of the set of values {1, 2, 2, 3, 4, 6} is 2. In Microsoft Excel, you can calculate a mode by using the function of the same name, the MODE function. For our sample data set, the formula goes as follows: 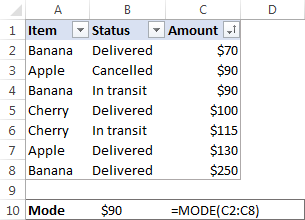 In situations when there are two or more modes in your data set, the Excel MODE function will return the lowest mode.

Mean vs. median: which is better?

Generally, there is no "best" measure of central tendency. Which measure to use mostly depends on the type of data you are working with as well as your understanding of the "typical value" you are attempting to estimate.

For a symmetrical distribution (in which values occur at regular frequencies), the mean, median and mode are the same. For a skewed distribution (where there are a small number of extremely high or low values), the three measures of central tendency may be different.

Since the mean is greatly affected by skewed data and outliers (non-typical values that are significantly different from the rest of the data), median is the preferred measure of central tendency for an asymmetrical distribution.

For instance, it is generally accepted that the median is better than the mean for calculating a typical salary. Why? The best way to understand this would be from an example. Please have a look at a few sample salaries for common jobs:

But let's see what happens if we extend the list of wages by including a celebrity who earns, say, about $30 million/year, which is roughly $14,500/hour. Now, the average wage becomes $2,451.67/hour, a wage that no one earns! By contrast, the median is not significantly changed by this one outlier, it is $50.50/hour. 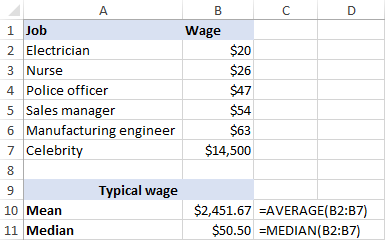 Agree, the median gives a better idea of what people typically earn because it is not so strongly affected by abnormal salaries.

This is how you calculate mean, median and mode in Excel. I thank you for reading and hope to see you on our blog next week!