Of all Excel functions, LEN is arguably the easiest and most straightforward one. The name of the function is easy to remember, it's nothing else but the first 3 characters of the word "length". And it is what the LEN function actually does - returns the length of a text string, or length of a cell.

To put it differently, you use the LEN function in Excel to count all characters in a cell, including letters, numbers, special characters, and all spaces.

In this short tutorial, we are going to cast a quick look at the syntax first, and then have a closer look at some useful formula examples to count characters in your Excel worksheets.

The LEN function in Excel counts all characters in a cell, and returns the string length. It has just one argument, which is obviously required:

Where text is the text string for which you want to count the number of characters. Nothing could be easier, right?

Below you will find a couple of simple formulas to get the basic idea of what the Excel LEN function does.

=LEN("good") - returns 4, because the word good contains 4 letters. Like any other Excel formula, LEN requires enclosing text strings double quotes, which are not counted.

In your real-life LEN formulas, you are likely to supply cell references rather than numbers or text strings, to count characters in a specific cell or a range of cells.

For instance, to get the length of text in cell A1, you'd use this formula:

More meaningful examples with detailed explanations and screenshots follow below.

How to use LEN function in Excel - formula examples

At first sight, the LEN function looks so simple that hardly requires any further explanation. However, there are some useful tricks that could help you tweak your Excel Len formula for your specific needs.

How to count all characters in a cell (including spaces)

As already mentioned, the Excel LEN function counts absolutely all characters in a specified cell, including all spaces - leading, trailing spaces, and spaces between words.

For example, to get the length of cell A2, you use this formula:

As shown in the below screenshot, our LEN formula counted 36 characters including 29 letters, 1 number, and 6 spaces.

For more details, please see How to count the number of characters in Excel cells.

To count characters in multiple cells, select the cell with your Len formula and copy it to other cells, for example by dragging the fill handle. For the detailed instructions, please see How to copy formula in Excel.

As soon as the formula is copied, the LEN function will return the character count for each cell individually.

And again, let me draw your attention that the LEN function counts absolutely everything including letters, numbers, spaces, commas, quotes, apostrophes, and so on:

Count a total number of characters in several cells

The most obvious way to get the total number of characters in several cells is add up a few LEN functions, for example:

Or, use the SUM function to total the character counts returned by LEN formulas:

Either way, the formula counts the characters in each of the specified cells and returns the total string length: 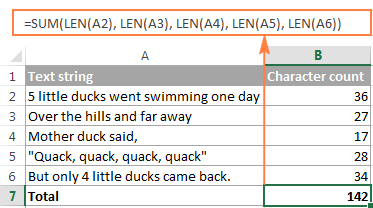 This approach is undoubtedly easy-to-understand and easy-to-use, but it's not the best way to count characters in a range consisting of, say, 100 or 1000 cells. In this case, you'd better use the SUM and LEN functions in an array formula, and I will show you an example in our next article.

How to count characters excluding leading and trailing spaces

When working with big worksheets, a common problem is leading or trailing spaces, i.e. extra spaces at the beginning or at the end of the items. You would hardly notice them on the sheet, but after you've faced them a couple of times, you learn to beware of them.

If you suspect there are a few invisible spaces in your cells, the Excel LEN function is a great help. As you remember, it includes all spaces in a character count:

To get the string length without leading and trailing spaces, simply embed the TRIM function in your Excel LEN formula:

If your aim is to get the character count without any spaces whether leading, trailing or in-between, you would need a bit more complex formula:

As you probably know, the SUBSTITUTE function replaces one character with another. In the above formula, you replace a space (" ") with nothing, i.e. with an empty text string (""). And because you embed SUBSTITUTE in the LEN function, the substitution is not actually made in cells, it just instructs your LEN formula to calculate the length of string without any spaces.

You can find a more detailed explanation of the Excel SUBSTITUTE function here: Most popular Excel functions with formula examples.

Occasionally, you may need to know the length of a certain part of a text string, rather than count the total number of characters in a cell.

And all valid SKUs have exactly 5 characters in the first group. How do you spot invalid items? Yep, by counting the number of characters before the first dash.

So, our Excel length formula goes as follows: 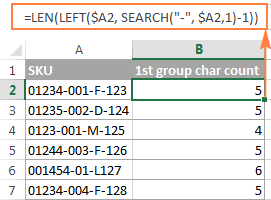 And now, let's break down the formula so that you can understand its logic.

As soon as the character count is there, you may want to take a step further, and highlight invalid SKUs by setting up a simple conditional formatting rule with a formula like =$B2<>5: 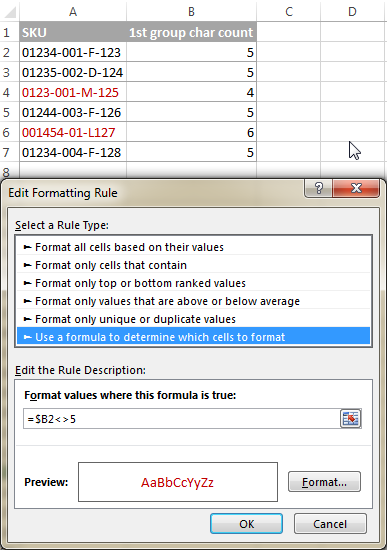 Or, you can identify invalid SKUs by embedding the above LEN formula in the IF function:

As demonstrated in the below screenshot, the formula perfectly identifies invalid SKUs based on a string length, and you don't even need a separate character count column: 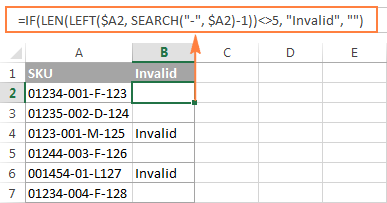 In a similar manner, you can use the Excel LEN function to count the number of characters after a specific character.

For example, in a list of names, you may want to know how many characters the Last Name contains. The following LEN formula does the trick: 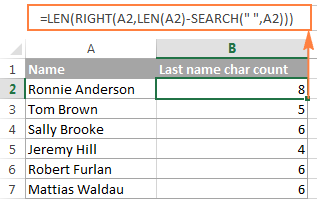 How the formula works:

Please note, for the formula to work correctly, each cell should contain just one space, i.e. only the First and Last name, with no middle names, titles or suffixes.

Well, this is how you use LEN formulas in Excel. If you want to have a closer look at the examples discussed in this tutorial, you are welcome to download a sample Excel LEN workbook.

In the next article, we are going to explorer other capabilities of the Excel LEN function, and you will learn a few more useful formulas to count characters in Excel:

In the meantime, I thank you for reading and hope to see you on our blog soon!