This next bit of our operations with text in spreadsheets is devoted to extraction. Find out ways to extract various data — text, characters, numbers, URLs, email addresses, date & time, etc. — from various positions in multiple Google Sheets cells at once.

Google Sheets formulas to extract text and numbers from strings

Formulas in Google Sheets are everything. While some combos add text & numbers and remove various characters, some of them also extract text, numbers, separate characters, etc.

The easiest functions to deal with when you're about to take out data from Google Sheets cells are LEFT, RIGHT, and MID. They get any data by position.

Extract data from the beginning of cells in Google Sheets

You can easily pull out the first N characters using the LEFT function:

Here's the simplest example: let's take out the country codes from the phone numbers: 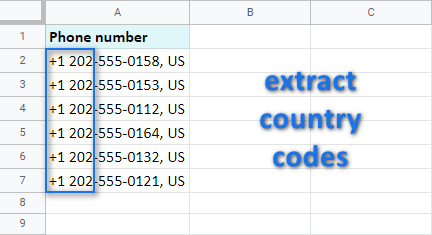 As you can see, country codes take 6 symbols at the beginning of cells, so the formula you need is:

Tip. ArrayFormula will make it possible to get 6 characters from the entire range at once:

Extract data from the end of cells in Google Sheets

To pull out the last N characters from cells, use the RIGHT function instead:

Let's get that country names from the same phone numbers:

They take only 2 characters and that's exactly what I mention in the formula:

Tip. ArrayFormula will also help you extract data from the end of all Google Sheets cells at once:

Extract data from the middle of cells in Google Sheets

By the example of the same phone numbers, let's find the phone numbers themselves without their country codes and country abbreviation:

As the country codes end with the 6th character and the 7th is the dash, I will pull numbers starting from the 8th digit. And I'll get 8 digits in total:

Tip. Changing one cell to the entire range and wrapping it in ArrayFormula will provide you with the result for each cell at once:

Sometimes extracting text by position (as shown above) is not an option. The required strings may reside in any part of your cells and consist of a different number of characters forcing you to create different formulas for each cell.

Whenever you want to extract data that precedes a certain text, use LEFT + SEARCH:

Combine these — and LEFT will return the number of characters suggested by SEARCH.

Here's an example: how do you extract textual codes before each 'ea'? 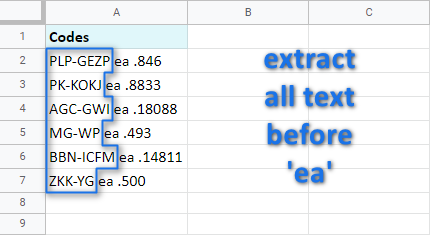 This is the formula that will help you in similar cases:

Here's what happens in the formula:

Extract data after the text

There are also means to get everything after a certain text string. But this time, RIGHT won't help. Instead, REGEXREPLACE takes its turn.

Tip. REGEXREPLACE uses regular expressions. If you're not ready to deal with them, there's a much easier solution described below.

So, how do you use it to extract data after a certain text — 'ea' in my example?

Let me explain how this formula works exactly:

Tip. All characters used in regular expressions are collected on this special page.

What if you want to extract only numbers when their position and whatever goes before & after doesn't matter?

In a similar fashion, you can take out only alphabetic data from Google Sheets cells. The contraction for the regular expression that stands for text is called accordingly — alpha:

This formula takes everything but letters (A-Z, a-z) and literally replaces it with "nothing". Or, to put it in another way, takes out only letters.

If you're looking for an easy formula-free way to extract various types of data, you've come to the right place. Our Power Tools add-on has just the tools for the job.

The first tool I'd like you to know is called Extract. It does exactly what you've come looking for in this article — extracts different types of data from Google Sheets cells.

All the cases I've covered above are not just solvable with the add-on. The tool is user-friendly so all you need to do is select the range you want to process and tick off the required checkboxes. No formulas, no regular expressions.

Remember the second point of this article with REGEXREPLACE and regular expressions? Here's how simple it is for the add-on:

As you can see, there are some extra options (just checkboxes) that you can quickly turn on/off to get the most precise result:

Not only Power Tools extracts data before/after/between certain text strings and the first/last N characters; but it also takes out the following:

Extract any string of data from everywhere

There's also an option to set up your own exact pattern and use it for the extraction. Extract by mask and its wildcard characters — * and ? — do the trick: 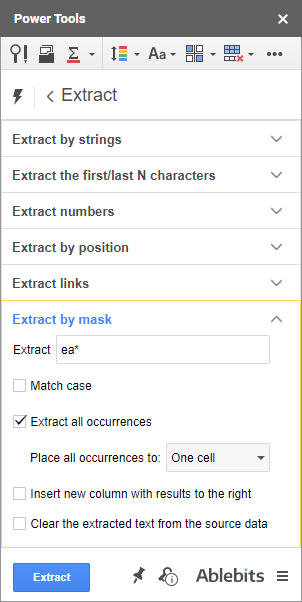 Extract date and time from timestamps

As a bonus, there's a smaller tool that will extract date and time from timestamps — it's called Split Date & Time.

Although it was created to split timestamps in the first place, it's perfectly capable of getting one of the desired units individually: 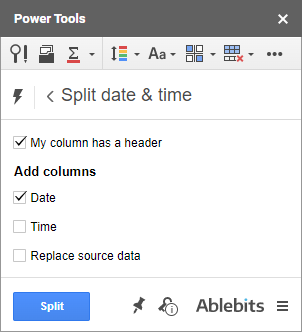 Just select one of the checkboxes depending on what you want to extract — date or time — from timestamps in Google Sheets and hit Split. The required unit will be copied over to a new column (or it will replace the original data if you select the last checkbox as well):

This tool is also part of the Power Tools add-on so once you install it to get any data from Google Sheets cells, it's got you covered completely. If not, please leave a comment and we'll help you out :)