The COUNT function in Google Sheets is one of the easiest to learn and extremely helpful to work with.

Even though it looks simple, it's capable of returning interesting and useful results, especially in combination with other Google functions. Let's get right into it.

What is COUNT and COUNTA in a Google spreadsheet?

The COUNT function in Google Sheets allows you to count the number of all cells with numbers within a specific data range. In other words, COUNT deals with numeric values or those that are stored as numbers in Google Sheets.

The syntax of Google Sheets COUNT and its arguments is as follows:

What can be used as an argument? The value itself, cell reference, range of cells, named range.

If you change the content of the cell that falls into the counting range, the formula will automatically recalculate the result.

If multiple cells contain the same value, COUNT in Google Sheets will return the number of all its appearances in those cells.

To be more precise, the function counts the number of times numeric values appear within the range rather than checks if any of the values are unique.

Tip. To count unique values in the range, use the COUNTUNIQUE function instead.

Google Sheets COUNTA works in a similar way. Its syntax is also analogous to COUNT:

What's the difference between COUNT and COUNTA? In the values they process.

As you can see, the main difference between the functions lies in the ability of COUNTA to process those values that Google Sheets service stores as text. Both functions ignore completely empty cells.

Have a look at the example below to see how the results of using COUNT and COUNTA differ depending on the values:

Since dates and time are stored and counted as numbers in Google Sheets, A4 and A5 were counted by both, COUNT and COUNTA.

A10 is completely empty, thus it was ignored by both functions.

Other cells were counted by the formula with COUNTA:

Both formulas with COUNT return the same result because A8:A12 range doesn't include numeric values.

A8 cell has a number stored as text which wasn't processed by Google Sheets COUNT.

The error message in A12 is entered as text and considered by COUNTA only.

Tip. To set more precise calculation conditions, I recommend you to use COUNTIF function instead.

How to use Google Sheets COUNT and COUNTA – examples included

Let's take a closer look at how the COUNT function is used in a Google spreadsheet and how it can benefit our work with tables.

Suppose we have a list of students' grades. Here are the ways COUNT can help:

As you can see, we have different formulas with COUNT in column C.

Since column A contains surnames, COUNT ignores that whole column. But what about cells B2, B6, B9, and B10? B2 has number formatted as text; B6 and B9 contain pure text; B10 is completely empty.

Another cell to bring your attention to is B7. It has the following formula in it:

Notice that the range starts from B2 and includes all other cells of this column. This is a very useful method when you often need to add new data to the column but want to avoid changing the range of the formula every time.

Now, how will Google Sheets COUNTA work with the same data?

As you can see and compare, the results differ. This function ignores only one cell – the completely empty B10. Thus, bear in mind that COUNTA includes textual values as well as numeric.

Here's another example of using COUNT to find an average sum spent on products:

The customers who haven't bought anything were omitted from the results.

One more peculiar thing regarding COUNT in Google Sheets concerns merged cells. There is a rule that COUNT and COUNTA follow to avoid double counting.

Note. The functions take into account only the leftmost cell of the merged range. 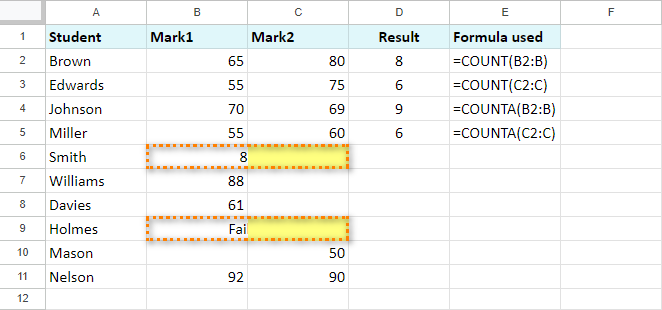 The left parts of the merged cells are excluded from this range, therefore are not considered by COUNT.

COUNTA works in a similar way.

If you'd rather count only unique values in the range, you'd better use the COUNTUNIQUE function. It requires literally one argument that can be repeated: a range or a value to process.

The formulas in spreadsheets will look as plain as this: 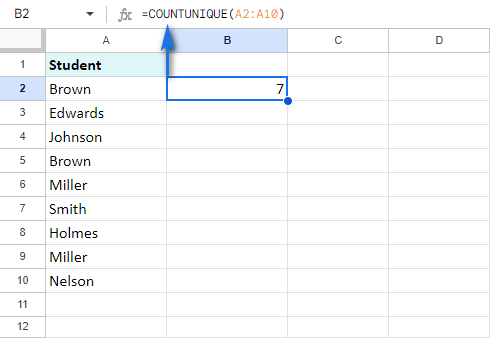 You can also enter multiple ranges and even records themselves directly to the formula: 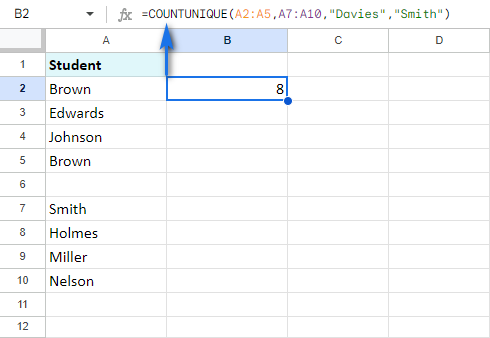 In case the standard count is not enough and you need to count only specific values based on some conditions, there is another special function for that – COUNTIF. All its arguments, the usage, and examples are covered in another special blog post.

To count & highlight duplicates in Google Sheets, visit this article instead.

I really hope that this article will assist your work with Google Sheets and that COUNT and COUNTA functions will serve you well.