How to open Excel files in separate windows and multiple instances

This post describes the easiest ways to open two or more Excel files in separate windows or new instances without messing with the registry.

Having spreadsheets in two different windows makes many Excel tasks easier. One of the possible solutions is viewing workbooks side by side, but this eats a lot of space and isn't always the best option. Opening an Excel document in a new instance is something more than just the ability to compare or view sheets next to each other. It's like having a few different applications running at the same time - while Excel is busy recalculating one of your workbooks, you can continue working on another.

Open Excel files in separate windows in Office 2010 and 2007

Excel 2010 and earlier versions had the Multiple Document Interface (MDI). In this interface type, multiple child windows reside under a single parent window, and only the parent window has a toolbar or menu bar. Therefore, in these Excel versions, all workbooks are opened in the same application window and share a common ribbon UI (toolbar in Excel 2003 and earlier).

In Excel 2010 and older versions, there are 3 ways to open files in multiple windows that actually work. Each window is, in fact, a new instance of Excel.

Excel icon on the taskbar

To open Excel documents in separate windows, this is what you need to do:

Another quick way to open Excel workbooks in different windows is this:

Whenever you need to open a new instance of Excel, double-click this desktop shortcut.

Excel option in the Send To menu

If you often have to open multiple Excel windows simultaneously, see this advanced shortcut solution. It is actually easier than it may seem, just try it: 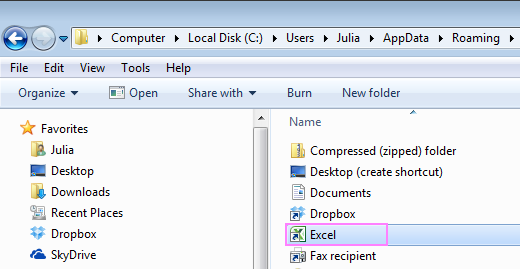 Now, you can avoid opening additional files from within Excel. Instead, you can right-click the files in Windows Explorer, and choose Send to > Excel.

Other suggestions that may work for you

There are two other solutions that work for many people. One of them is selecting the "Ignore other applications that use Dynamic Data Exchange (DDE)" option in Advanced Excel Options. The other one involves registry changes.

Open Excel files in multiple windows in Office 2013 and later

Beginning with Office 2013, each Excel workbook is displayed in a separate window by default, even though it is the same Excel instance. The reason is that Excel 2013 started to use the Single Document Interface (SDI), in which each document is opened in its own window and handled separately. Meaning, in Excel 2013 and later versions, each application window can only contain one workbook that has its own ribbon UI.

So, what do I do to open files in different windows in modern Excel versions? Nothing special :) Just use the Open command in Excel or double-click a file in Windows Explorer. To open a file in a new Excel instance, follow these instructions.

How to open Excel sheets in separate windows

To get multiple sheets of the same workbook to open in different windows, carry out these steps:

How to open multiple instances of Excel

When opening multiple files in Excel 2013 and later, each workbook is displayed in a separate window. However, they all open in the same Excel instance by default. In most cases, that works just fine. But if you execute a long VBA code or recalculate complex formulas in one workbook, other workbooks within the same instance may become irresponsive. Opening each document in a new instance solves the problem - while Excel performs a resource-consuming operation in one instance, you can work in a different workbook in another instance.

Here are a few typical situations when it makes sense to open each workbook in a new instance:

Below, you will find 3 quick ways to create multiple instances of Excel 2013 and higher. In earlier versions, please use the techniques described in the first part of this tutorial.

The fastest way to open a new instance of Excel is this:

This can also be done by using the mouse wheel: while holding the Alt key, click the Excel icon in the taskbar, and then click on the scroll wheel. Hold Alt until the pop-up window appears just like shown above.

Open Excel file in a separate instance from Windows Explorer

Opening a specific workbook is more convenient from File Explorer (aka Windows Explorer). As with the previous method, it's the Alt key that does the trick:

How do I know which Excel files are in which instance?

To check how many Excel instances you have running, open the Task Manager (the fastest way is to press the Ctrl + Shift + Esc keys together). To view the details, expand each instance and see which files are nested there. 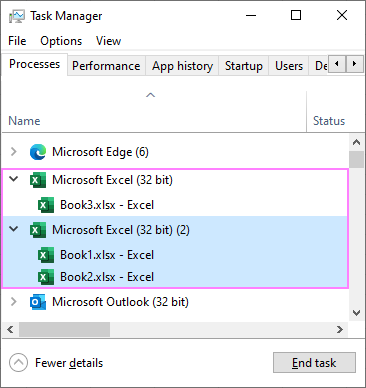 That's how to open two Excel sheets in separate windows and different instances. That was pretty easy, wasn't it? I thank you for reading and look forward to seeing you on our blog next week!