How to use LINEST function in Excel - formula examples

This tutorial explains the syntax of the LINEST function and shows how to use it to do linear regression analysis in Excel.

Microsoft Excel is not a statistical program, however, it does have a number of statistical functions. One of such functions is LINEST, which is designed to perform linear regression analysis and return related statistics. In this tutorial for beginners, we will touch only lightly on theory and underlying calculations. Our main focus will be on providing you with a formula that simply works and can be easily customized for your data.

The LINEST function calculates the statistics for a straight line that explains the relationship between the independent variable and one or more dependent variables, and returns an array describing the line. The function uses the least squares method to find the best fit for your data. The equation for the line is as follows.

The syntax of the Excel LINEST function is as follows:

Note. Since LINEST returns an array of values, it must be entered as an array formula by pressing the Ctrl + Shift + Enter shortcut. If it is entered as a regular formula, only the first slope coefficient is returned.

The stats argument set to TRUE instructs the LINEST function to return the following statistics for your regression analysis:

The below map shows the order in which LINEST returns an array of statistics:

In the last three rows, the #N/A errors will appear in the third and subsequent columns that are not filled with data. It is the default behavior of the LINEST function, but if you'd like to hide the error notations, wrap your LINEST formula into IFERROR as shown in this example.

How to use LINEST in Excel - formula examples

The LINEST function might be tricky to use, especially for novices, because you should not only build a formula correctly, but also properly interpret its output. Below, you will find a few examples of using LINEST formulas in Excel that will hopefully help to sink the theoretical knowledge in :)

For example, with y values (sales numbers) in C2:C13 and x values (advertising cost) in B2:B13, our linear regression formula is as simple as:

To enter it correctly in your worksheet, select two adjacent cells in the same row, E2:F2 in this example, type the formula, and press Ctrl + Shift + Enter to complete it.

The formula will return the slope coefficient in the first cell (E2) and the intercept constant in the second cell (F2): 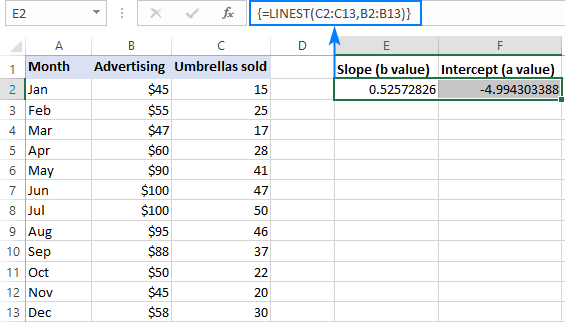 The slope is approximately 0.52 (rounded to two decimal places). It means that when x increases by 1, y increases by 0.52.

The Y-intercept is negative -4.99. It is the expected value of y when x=0. If plotted on a graph, it is the value at which the regression line crosses the y-axis.

Supply the above values to a simple linear regression equation, and you will get the following formula to predict the sales number based on the advertising cost:

For example, if you spend $50 on advertising, you are expected to sell 21 umbrellas:

The slope and intercept values can also be obtained separately by using the corresponding function or by nesting the LINEST formula into INDEX:

As shown in the screenshot below, all three formulas yield the same results:

In case you have two or more independent variables, be sure to input them in adjacent columns, and supply that whole range to the known_x's argument.

As formula is going to return an array of 3 values (2 slope coefficients and the intercept constant), we select three contiguous cells in the same row, enter the formula and press the Ctrl + Shift + Enter shortcut.

Please note that the multiple regression formula returns the slope coefficients in the reverse order of the independent variables (from right to left), that is bn, bn-1, …, b2, b1: 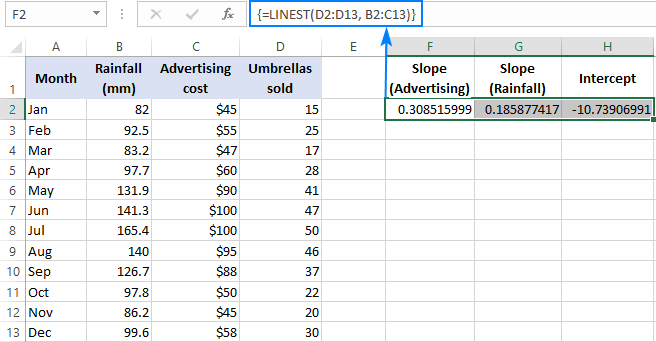 To predict the sales number, we supply the values returned by the LINEST formula to the multiple regression equation:

For example, with $50 spent on advertising and an average monthly rainfall of 100 mm, you are expected to sell approximately 23 umbrellas:

Apart from calculating the a and b values for the regression equation, the Excel LINEST function can also estimate the dependent variable (y) based on the known independent variable (x). For this, you use LINEST in combination with the SUM or SUMPRODUCT function.

For example, here's how you can calculate the number of umbrella sales for the next month, say October, based on sales in the previous months and October's advertising budget of $50: 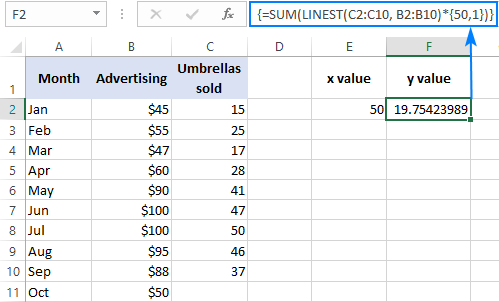 Instead of hardcoding the x value in the formula, you can provide it as a cell reference. In this case, you need to input the 1 constant in some cell too because you cannot mix references and values in an array constant.

With the x value in E2 and the constant 1 in F2, either of the below formulas will work a treat: 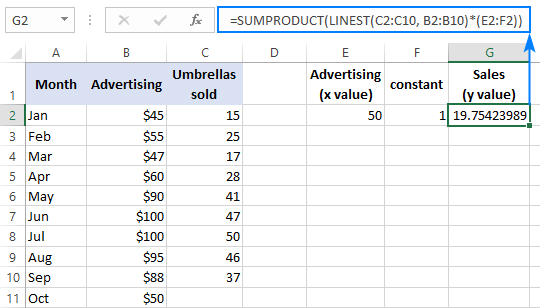 To verify the result, you can get the intercept and slope for the same data, and then use the linear regression formula to calculate y: 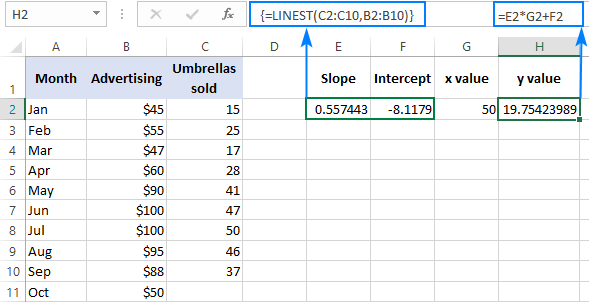 In case you are dealing with several predictors, i.e. a few different sets of x values, include all those predictors in the array constant. For example, with the advertising budget of $50 (x2) and an average monthly rainfall of 100 mm (x1), the formula goes as follows:

Please pay attention to the order of the x values in the array constant. As pointed out earlier, when the Excel LINEST function is used to do multiple regression, it returns the slope coefficients from right to left. In our example, the Advertising coefficient is returned first, and then the Rainfall coefficient. To calculate the predicted sales number correctly, you need to multiply the coefficients by the corresponding x values, so you put the elements of the array constant in this order: {50,100,1}. The last element is 1, because the last value returned by LINEST is the intercept that should not be changed, so you simply multiply it by 1.

Instead of using an array constant, you can input all the x variables in some cells, and reference those cells in your formula like we did in the previous example.

As you may remember, to get more statistics for your regression analysis, you put TRUE in the last argument of the LINEST function. Applied to our sample data, the formula takes the following shape:

As we have 2 independent variables in columns B and C, we select a rage consisting of 3 rows (two x values + intercept) and 5 columns, enter the above formula, press Ctrl + Shift + Enter, and get this result: 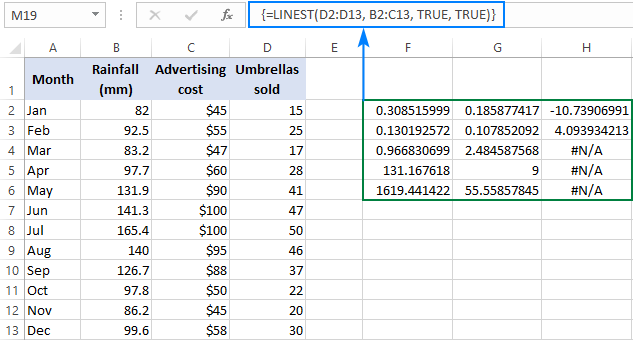 To get rid of the #N/A errors, you can nest LINEST into IFERROR like this:

The screenshot below demonstrates the result and explains what each number means:

The slope coefficients and the Y-intercept were explained in the previous examples, so let's have a quick look at the other statistics.

Coefficient of determination (R2). The value of R2 is the result of dividing the regression sum of squares by the total sum of squares. It tells you how many y values are explained by x variables. It can be any number from 0 to 1, that is 0% to 100%. In this example, R2 is approximately 0.97, meaning that 97% of our dependent variables (umbrella sales) are explained by the independent variables (advertising + average monthly rainfall), which is an excellent fit!

Standard errors. Generally, these values show the precision of the regression analysis. The smaller the numbers, the more certain you can be about your regression model.

Regression sum of squares (aka the explained sum of squares, or model sum of squares). It is the sum of the squared differences between the predicted y-values and the mean of y, calculated with this formula: =∑(ŷ - ȳ)2. It indicates how much of the variation in the dependent variable your regression model explains.

5 things you should know about LINEST function

To efficiently use LINEST formulas in your worksheets, you may want to know a bit more about the "inner mechanics" of the function:

If your LINEST formula throws an error or produces a wrong output, chances are it's because of one of the following reasons:

That's how you use LINEST in Excel for a simple and multiple linear regression analysis. To have a closer look the formulas discussed in this tutorial, you are welcome to download our sample workbook below. I thank you for reading and hope to see you on our blog next week!